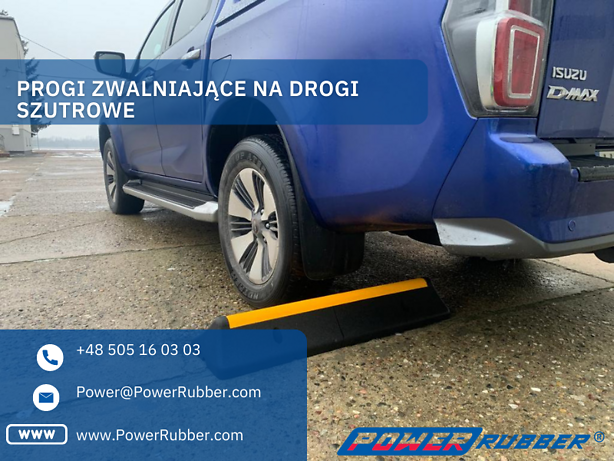 The speed bump is a convex element, resembling a hump. It forces drivers to drive slower, which enables effective braking in the event of a pedestrian intrusion onto the road. The use of speed bumpsis usually associated with urban roads, i.e. hard and flat surfaces, e.g. asphalt, concrete or paved surfaces. They are used to limit the speedof drivers driving in narrow streets with a lot of pedestrians, such as children on their way to school. However, thresholds can be installed not only on asphalt roads in cities and towns, but also on gravel or dirt roads. It is to serve the safety of passers-by, therefore its assumption may be justified in various, even unusual, places.

Gravel road – problems related to it

A gravel road, or dirt road, does not have a specific definition, but it is a hard, public road, except for private roads or those leading to forests. On unpaved roads, as they are public roads, road traffic rules apply. Polish law says that in built-up areas you can move at speeds of up to 50 km / h, and outside built-up areas up to 90 km / h. The problem on the gravel road is that drivers, driving at high speeds, propel dust, gravel or sand into the air, which significantly complicates the daily life of the inhabitants of a given town or village. Dust from the road settles on nearby houses, yards, plants and people, and this is a problem raised by numerous municipalities. Moreover, high speed on gravel roads can be very dangerous to the life and health of passers-by, as well as to the drivers themselves. The braking distance on loose dirt road is longer than on asphalt road. Unaware of this, a speeding driver can cause a serious accident. For these reasons, the topic of excessive speeding on non-asphalt roads is necessary to be resolved by the municipalities where this problem occurs.

For the above reasons, it seems justified to use thresholds on non-asphalt roads, where residents report the problem of excessive speed on a road not adapted to fast driving. Poland does not legally take into account what speed should be maintained on gravel roads, so the only solution may be to install decelerators in order to force drivers to drive slower and more calmly. Using the street should be comfortable for everyone – both for drivers and passers-by.

What do the thresholds on gravel roads help with?

Throttle decelerators can be used on roads in built-up areas, on local roads and access roads – this is what the law defines. It follows from this that such a threshold can be installed on a dirt road. Poland is a country where, in built-up areas, you can drive usually at speeds of up to 50 km / h during the day. Sometimes, however, the speed is too high. Some localities deal with this problem by installing thresholds to slow down driving in the right place. The thresholds should have appropriate dimensions – for example, they should not be higher than 10 cm, so as not to damage the vehicles and to prevent the suspension from getting caught on the threshold. Comments from residents where the problem occurs show that the use of throttles solves, at least in part, the inconvenience.

The decision to use a speed bump is made by the road administrator, usually the commune. It is to the head of the commune or the mayor that the application for limiting the speed on a given section and for setting up or building a threshold should be sent. The likelihood of accepting the application will be greater when a large number of residents sign it. 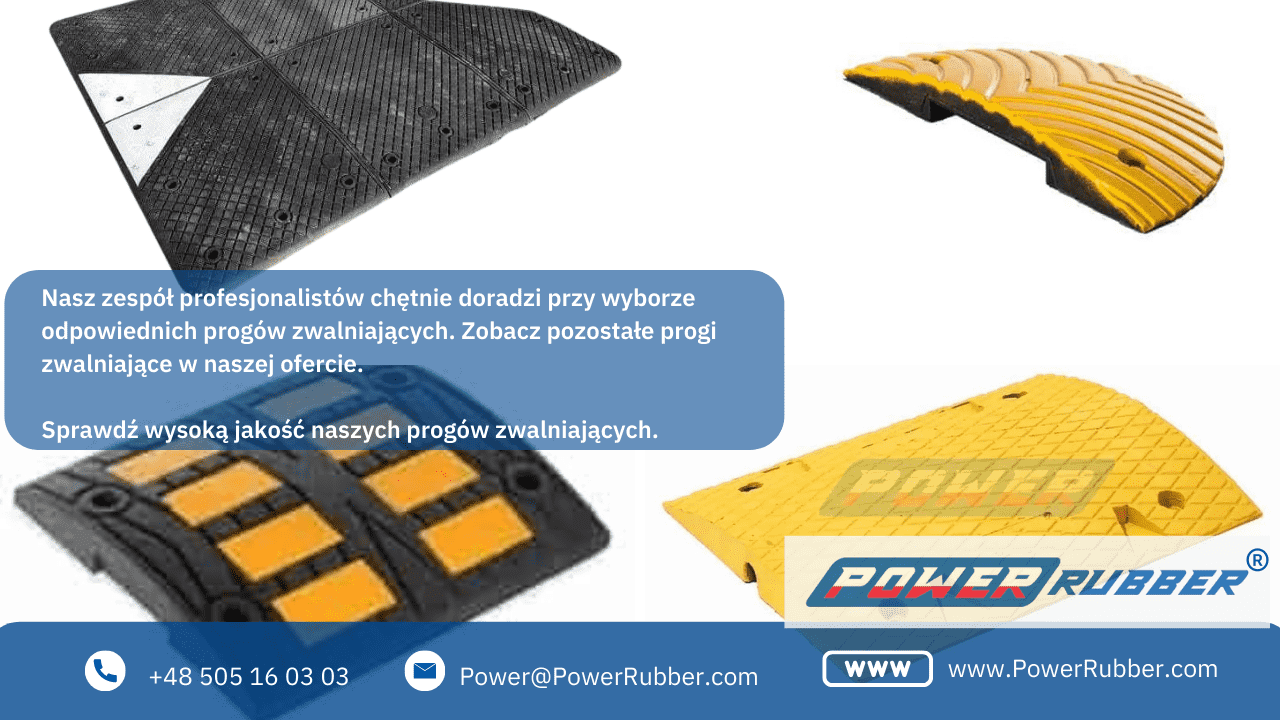 A typical speed bump is made of rubber or concrete cube, which makes it abrasion resistant. This is an important feature because it is used intensively on the road. They are also non-slip, so that driving on them is safe and the car does not skid. The thresholds are equipped with reflective elements that allow them to be seen on a dark road after dark. Their intense colors, e.g. red or yellow, make them visible from a distance during the day. Celem zastosowania progu zwalniającego jest zmuszenie kierowcy do ograniczenia prędkości, a żeby tak się stało, próg musi być dobrze widoczny o każdej porze. The purpose of a speed bump is to force the driver tolimit his speed, and for that to happen, the speed bump must be clearly visible at all times. The assembly elements are designed so that the threshold can be permanently attached to the surface.

The subject of speed limits is no stranger to the inhabitants of housing estates, narrow streets and people living near schools and kindergartens. They can also be used in car parks, shopping centers and gas stations. Comments on the use of this type of brake vary, but the fact is that it is an effective way of forcing drivers to drive carefully. They can be purchased in parts, e.g. middle or end elements, or choose the complete set. Also, the shapes and length of the threshold can be selected from several. The threshold should be adjusted to the road and destination. The thresholds for city streets, which are designed to slow down passenger cars, but not buses, are an island type. They are so narrow that the bus does not run into them with the wheels. On the other hand, longitudinal, strip-shaped roads will be suitable for dirt roads along the entire width of the road. There are various dimensions to choose from, so that they can be selected for specific conditions and it is impossible to avoid them from the side. Thanks to them, cars will not travel faster than 20-30 km / h. The limiters are designed in such a way that the passage is smooth and comfortable at the appropriate speed. They consist of several central elements, two side elements and fasteners, either permanently or temporarily.

Beware of the regulations!

The installation of thresholds is related to compliance with the regulations. They are required to be properly marked. For this purpose, appropriate signs should be put up. These are: a deceleration warning sign, a speed limit sign in front of a threshold and a sign giving the remaining distance to the speed bump. These are respectively: sign A-11a, sign B-33 and plate T-1.