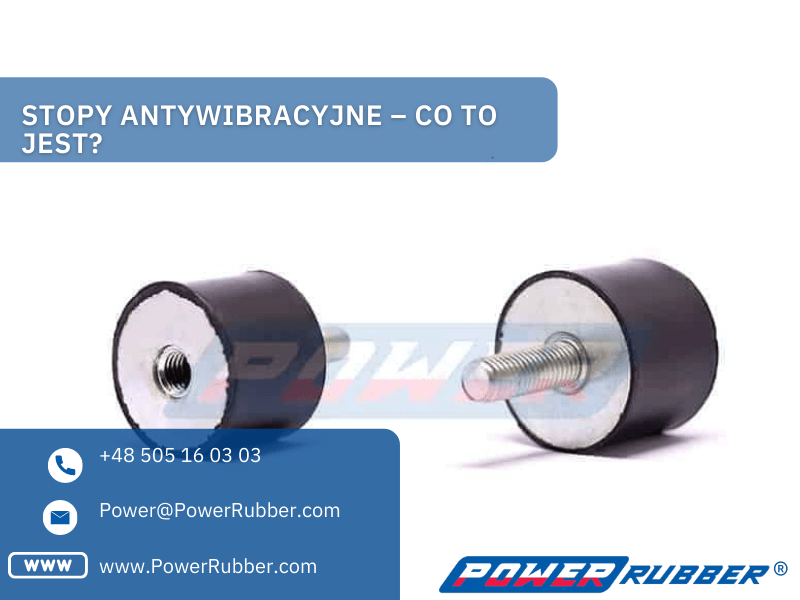 Anti-vibration feet are installed in order to reduce the transfer of excitation forces between the vibrating mass and its foundations or load-bearing structure. They function as a spring which, under pressure (force applied), accumulates energy. The energy is released when the applied force is removed. The anti-vibration feet are designed in such a way that the energy released from the spring effectively counteracts the forces exerted by the external vibrating motion. This is how the spring reduces the force transmitted to the machines and isolates the vibrations it creates. When installing the anti-vibration foot, the frequency ratio between the machine generating the vibrations and the spring which absorbs the vibrations must be maintained. The greater the ratio of the excitation frequency to the natural frequency, the more efficient the isolation is. The rubber from which the springs are made is characterized by high elasticity, which is why it is a material that works perfectly in anti-vibration feet, shock absorbers and rubber springs.

Rubber – what are its properties?

Rubber, in addition to high elasticity and flexibility, also has other properties, thanks to which it has many applications.

The versatility of rubber

The hardness of the rubber

The Shore A hardness scale and IRHD determine the hardness of materials made of rubber. The greater the hardness, the greater the indentation resistance of the material. There are anti-vibration alloys on the market with a hardness from 30sh (soft rubber) to 75sh (hard rubber).

Rubber is a material that, like fluid, is an incompressible material. Free space in the rubber has a significant impact on the rigidity of the fastening, which is related to its natural frequency. Stiffness is measured in kg / mm. It is a measure of the force required to deflect the mount for a given deflection.

This is a change in the shape of the rubber (deformation) under a constant, long-term static load that increases over time. It is assumed that most of the deformation will occur within the first two days from the moment the load is applied. Creep occurs faster with increasing temperature.

Rubber that is subjected to constant, long-term stress will not return to its original state after its removal.

Long-term, cyclic compression of the rubber dissipates some of the energy due to stretching and compression (hysteresis), turning it into heat. Hysteresis measures the difference between energy output and energy loss. Natural rubber has a low hysteresis, which makes it highly elastic. High resilience provides excellent vibration absorption properties. Cyclical deformation due to vibrations increases the force required to achieve static deflection. This increase is the dynamic stiffness which is higher than the static stiffness (depending on the type of rubber).

Fatigue of the gum

Fatigue is defined as the change in rubber properties which, as a result of long-term cyclic loads, accumulate heat as a result of hysteresis, thereby reducing its high elasticity. Atmospheric conditions, mechanical crack propagation may change the stiffness of the rubber, which in turn contributes to, among other things, for dynamic crack growth. If the stress at the end of the fracture is constant and does not increase, then further fracture is stopped. This is possible with natural rubber that crystallizes. In the case of non-crystallizing rubber (SBR, EPDM, NBR), no crystals are formed at the end of the crack, which will inhibit further crack growth. Even under constant load, the fracture will continue to grow. Non-crystalline rubbers work well, for example, when mounting a radiator, ensuring good service life. 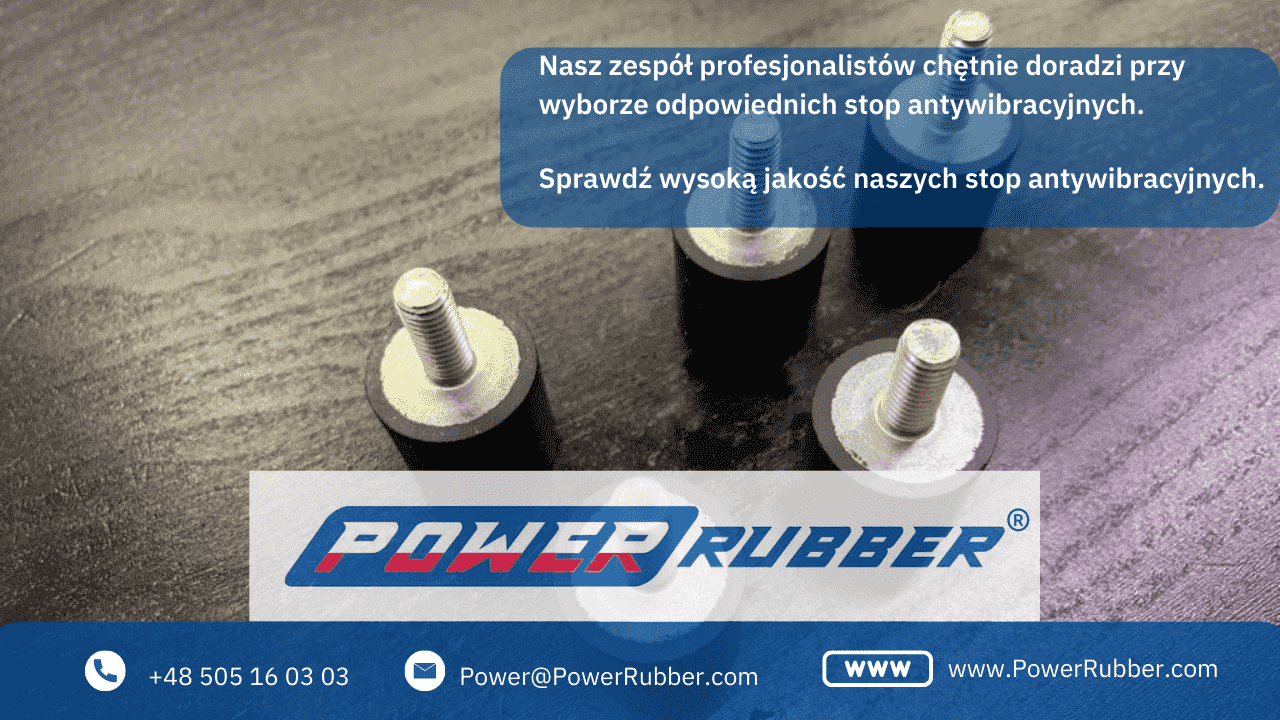 Anti-vibration feet consist of rubber and metal components. They are manufactured using one of two methods: injection molding or compression.

Check how the vibrating elements are made, step by step:

Before starting the rubber forming process, all metal parts should be degreased. Degreasing the metal ensures the appropriate bond strength between it and the rubber. This is followed by shot blasting or chemical treatment of the metal, i.e. phosphatizing.

The chemical adhesive can be applied by hand brushing, dipping or spraying. It is applied to physically bond rubber to metal, which occurs during the molding process, where heat causes a chemical reaction.

Hardening rubber (vulcanization) is the process of creating cross-links between polymer molecules. The result of the bonds is a thermosetting material that fully retains its mechanical and elastic properties (regains its original shape after being loaded). The curing of the rubber is achieved in a stage in which the rubber and additives are subjected to pressure and heat (molding stage).

Rubber elements are created as a result of pressure on the upper and lower half of the mold, in which there are rubber semi-finished products. During this time, the mold is heated to vulcanize the rubber.

The piston exerts pressure on the rubber elements placed in the container which is located above the mold cavities. The rubber creates the finished part by pushing it into the mold cavities with the help of transfer holes. As with compression molding, the mold is also heated here to cure or vulcanize the rubber. Better rubber mixing results in better mechanical properties, making injection molded parts better for bending and dynamics applications.

Rubber elements are created by injecting it under a certain pressure into the center of the mold, which gives them the desired shape. The pressure and temperature to which the rubber is subjected is higher than for compression molding. The injection molding process is a fully automated production system that ensures short production times, higher productivity and an aesthetic finish of the product.

Occasionally, a small amount of rubber will flow through any of the holes, causing leaks. This causes excess rubber to appear on the surface of the finished part. To improve the aesthetics of the finished product, excess gum is removed by manual trimming, cryogenic foaming or tumbling.

The protection of the exposed metal elements (e.g. galvanization, phosphorization) protects them against the adverse effects of the environment and prevents the formation of rust. Failure to protect the metal against corrosion may reduce the bond strength. 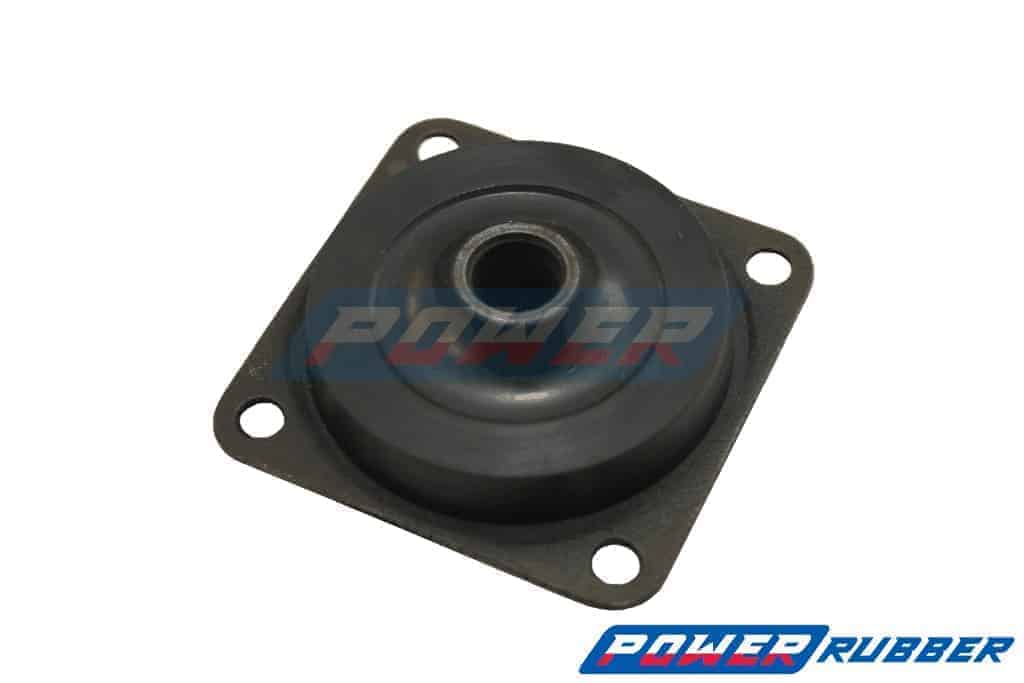 Here you can buy various types of rubber shock absorbers

Each machine, regardless of its weight, generates vibrations and vibrations during operation. They differ in intensity and amplitude.

In operation, the machine is subjected to an excitation force and begins to vibrate freely at its natural frequency until it cannot stop. The frequency and velocity of vibrations are proportional to the spring rate, mass and inertia. If the mass hangs freely without any restrictions, the direction of oscillation (vibration) can be in three directions: longitudinal, lateral, transverse. Vibrations can also take place in rotational motion. When the frequencies are coupled, it is possible that a body propelled in one direction will trigger other vibration modes, which is not advisable. The installation of anti-vibration springs allows to separate the frequencies from each other, and thus to avoid an increase in the amplitude of the vibrations of the vibrating system.

Any vibration isolation calculations should be performed by a specialist. If we want to effectively dampen vibrations, it is necessary to take into account the elements that have a significant impact on it. One of them is the need to avoid resonance of structural parts. The natural frequency and the forced frequency cannot be the same as this causes the vibration to be amplified. Anti-vibration elements made of natural rubber are characterized by low hysteresis, and thus high elasticity. They also show low static to the dynamic stiffness coefficient. 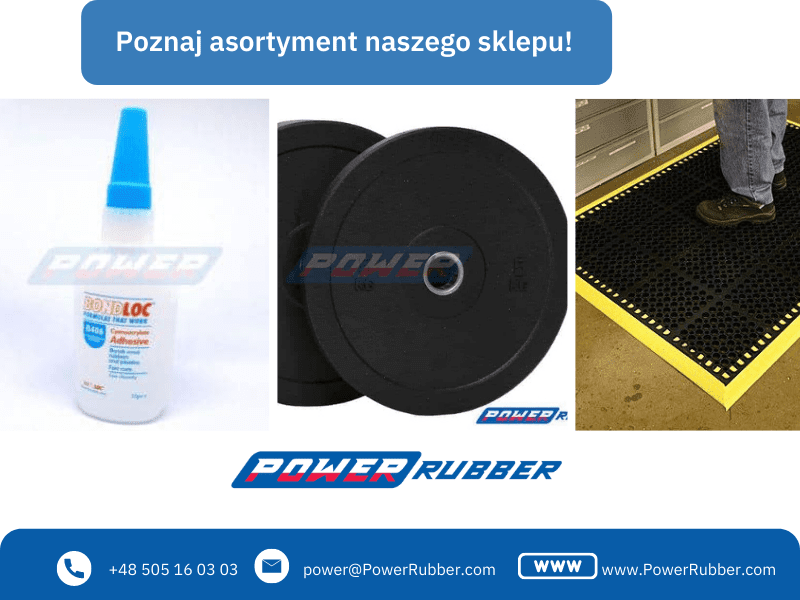